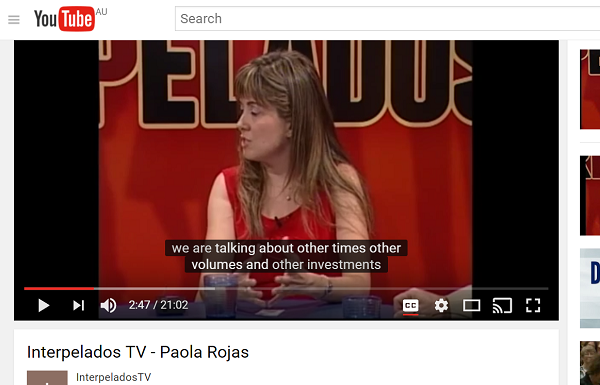 Can you believe I never had a chance to see this? I found it by googling myself (yeah I do that sometimes) just a few days ago. In September 2012 I was a guest at a live broadcast of a local TV Show in Salta, northern Argentina. I had been interviewed before but never on a political opinion show, so this was quite interesting. I was in Salta for the Argentina Mining Convention, which I used to run (now managed by my fabulous brother, as I’ve mentioned in the about me page). It used to be a very tiring marathon to do this conference but I keep some very lovely memories from those times.

The whole program (this video is just a section) is in Spanish but if you are curious, activate closed captions (here’s how to do it), and you can go to settings and click on autotranslate; it is not a perfect translation but you can have an idea. But the reason I am posting this is because I got such a shock to see how serious I look here! I don’t look like this anymore, thanks to my lovely adoptive home.

I basically talk about the conference, and about some of the perceptions that a portion of the Argentinean population has about the mining industry, and how it can generate lots of development for the communities near the projects. Have a look below:

*translates to being interviewed, somewhat seriously. So I get it now how it was perfect ha!

Find me on Social Media

Start up founders and owners of assets, I got your back... Join our accelerate mailing list below:

I am writing mostly about

Synergy Resource Capital is an investment and corporate advisory firm focused on natural resources and technology, and based in Sydney.